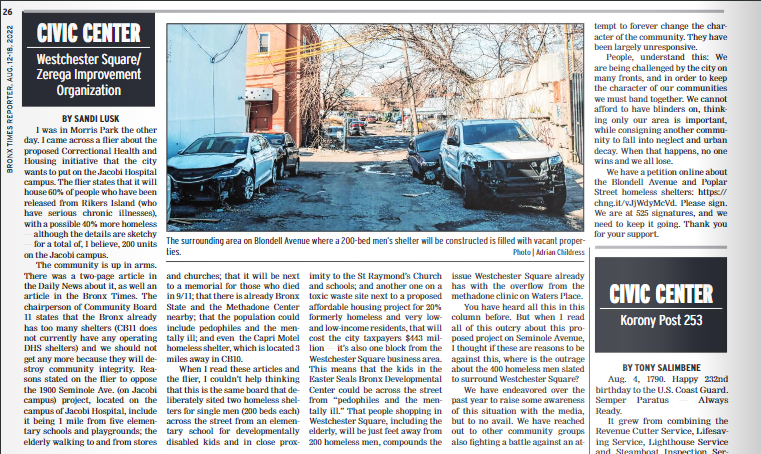 We All Sink or Swim Together

​I was in Morris Park the other day. I came across a flier about the proposed Correctional Health and Housing initiative that the city wants to put on the Jacobi campus. The flier states that it will house 60% of people who have been released from Rikers (who have serious chronic illnesses) with a possible 40% more homeless, although the details are sketchy, for a total of I believe 200 units on the Jacobi Hospital campus.  The community is up in arms. There was a 2-page article in the Daily News about it, as well an article in the Bronx Times. The Chairperson of CB 11 states that the Bronx already has too many shelters (CB11 does not have any currently operating DHS shelters) and we should not get any more because they will destroy community integrity.

Reasons stated on the flier to be against the 1900 Seminole Avenue (on Jacobi campus) project  include it being 1 MILE from 5 elementary schools and playgrounds; the elderly walking to and from stores and churches; that it will be next to a Memorial for those who died in 9/11; that there is already Bronx State and the Methadone Center; that the population could include pedophiles and the mentally ill; and here is the best: the Capri Motel homeless shelter (which is in community board 10).

When I read these articles and the flier I couldn’t help thinking that this is the same board that deliberately sited 2 homeless shelters for single men (200 beds each) 1) across the street (several yards away) from an elementary school for developmentally disabled kids and in close proximity (several blocks) to the St Raymond’s church and schools and another one on a toxic waste site (next to a proposed affordable housing project for 20% formerly homeless and extra low-, low-income residents) that will cost the city taxpayers $443,000,000 1 block in from the Westchester Square business area. This means that the kids in the Easter Seals Bronx Developmental Center may be across the street from “pedophiles and the mentally ill.” That people shopping in Westchester Square, including the elderly, will be just feet away from 200 homeless men, compounding the issue Westchester Square already has with the overflow from the methadone clinic on Waters Place.

You have heard all this in this column before. But when I read all of this outcry about this proposed project on Seminole I thought if these are reasons to be against this, where is the outrage about the 400 homeless men slated to surround Westchester Square? We have endeavored over the past year to raise some awareness of this situation with the media, but to no avail. We have reached out to other community groups also fighting a battle against an attempt to forever change the character of the community. They have been largely  unresponsive. People, understand this: we are being challenged by the city on many fronts, and in order to keep the character of our communities we must band together.

​We cannot afford to have blinders on, thinking only our area is important, while consigning another community to fall into neglect and urban decay. When that happens, no one wins and we ALL lose.
We have a petition online about the Blondell and Poplar Street DHS homeless shelters: https://chng.it/vJjWdyMcVd. PLEASE sign. We are at 525, and we need to keep it going! Thank you for your support.
TTFN
Powered by